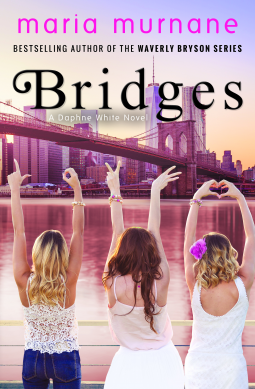 It’s a piece of news Daphne never expected to hear: Her globe-trotting friend Skylar, who vowed never to get married, is engaged! Time to celebrate in Manhattan—Skylar’s treat, of course. After years scaling the corporate ladder, she can more than afford it.

Daphne arrives in NYC with news of her own—the novel she’s finally finished appears to be going nowhere but the trash bin of every publishing house around. She’s devastated but plans to keep her disappointment under wraps, something that becomes trickier when she sees Skylar’s spectacular apartment. Could her life have been like this if she’d chosen a different path?

What Daphne doesn’t know is she’s not the only one with a secret. Skylar and their friend KC are also holding something back, but what? As the trip unfolds, the truth about each woman emerges, along with tears. And laughter. And love.

Bridges - A Daphne White Novel is a delightful story of three women in their early forties who have been best friends since college. The story takes place over four or five days in New York as they come together to celebrate the engagement of Skylar.

While Skylar has obviously done very well, she is also kind and generous and wants to give her two friends a great time. And they do, and while they travel around New York, letting us in on some of the great aspects of this city, they renew their friendship and deepen it.

This is an excellent exploration of the friendship of women at its best. They are there for one another, genuinely care for one another, and sometimes... get it wrong. One aspect that I really loved was the feelings that arose especially for Daphne, when she compared herself to Skylar and found herself wanting and filled with self doubt. What she does with that self doubt was so real, and what many of us most likely do. What struck me though was the honest communication between them that ensured that the friendship would endure.

All three women are likeable yet I probably liked Daphne the most and that may be due to the fact it is more from Daphne's point of view. I felt she was so genuine and learned so much about herself and the need to persevere and not give up hope in her desire to have a novel published.   However I was thrilled for K.C. and her news and really Skylar was wonderful too and I loved how she reaches out to her soon to be step daughter Sloane. That relationship pointed out that we can never judge what is going on for a person, unless of course they tell us!